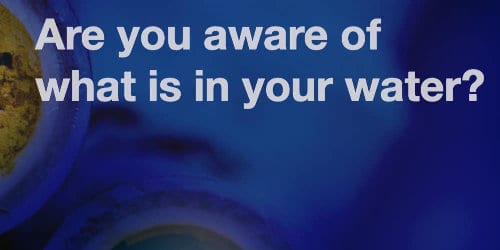 Water quality, even from municipal water supplies that meets Safe Drinking Water Act standards, is unpredictable and can fluctuate daily due to uncontrollable circumstances such as water main breaks and flooding. Removing sediment is the first line of defense to reducing bacteria amplification in building water systems. 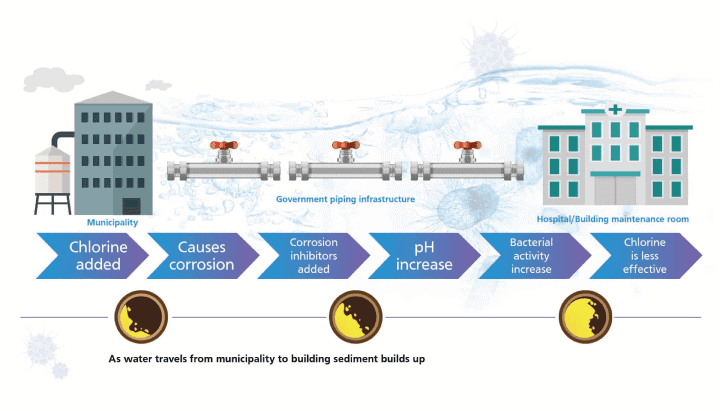 Liqui-filtra, a point-of-entry filtration solution is the first line of defense against harmful bacteria and sediment and is a critical step at improving environment of care through water safety.

Liqui-filtra continuously monitors real time operation, effectively removes sediment, and reduces corrosion particulate, while optimizing water quality and saving your facility time and money. This automatic self-cleaning filter system provides you and your processes with the most reliable performance.

Organizations are empowered to be proactive and prevent emergencies based on real-time water quality, water flow and pressure data. Alerts help determine water usage variances and can signal stagnation risk.

Provides safety against uncontrollable events such as weather changes and water main breaks that can cause water quality fluctuations and lead to bacteria amplification.

Sediment reduction increases the efficacy of all waterborne disinfectants, even municipal chlorine.

The liqui-filtra POE filtration solution consists of the following components:

The liqui-filtra filter, constructed of durable stainless steel, is designed to provide many years of consistent usage.

Constantly monitors the status and operation of each individual filter in the system.

While the controller provides the live data, the filter, valves, and sensors operate in a 3-step cleaning process as depicted in the following image:

As water flows through the filter, sediment is pulled out and deposited on the coarse and fine screens. Once the cleaning cycle is complete, the flush valve closes, and the system returns to normal operation - using only a few gallons of water.

Sediment build up causes a pressure differential. Once a differential of 7 PSI is reached, a cleaning cycle is initiated.

The flush valve opens, creating a low-pressure path for the suction nozzles to vacuum the debris from the screen. Purge cycle is completed without interrupting the main flow. 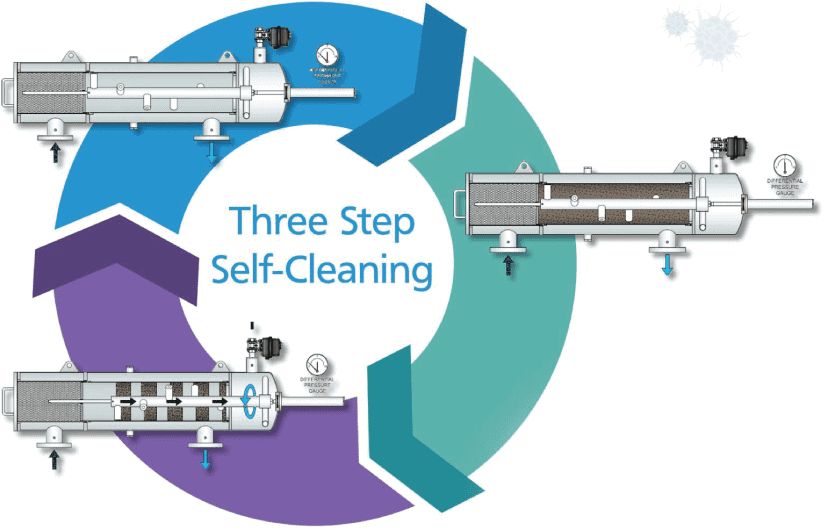 How does the data generated by liqui-filtra really help me and how can it help with my water management plan?

There is a host of information that is tracked, collected and reported from liqui-filtra and numerous ways it can be vital to keeping your building’s water safe.

There is generally an assumption by facility staff that the equipment is working correctly but the information tracked by liqui-filtra assists in generating a risk profile that can be very impactful for the building’s water safety.

Let’s look at a real hospital facility application. Through liqui-filtra it was shown that a hospital had a large amount of pressure variation from the municipal source. One day the pressure would be 80 and the next drop to 70. A 10 psi difference from one day to the next. Consider the sediment accumulating in the pipes and the effects of pressure change. An analogy to paint the picture is waves in the ocean that vary and cause deposition and erosion on a beach. When pressure in the pipes constantly changes it disturbs the sediment and biofilm, breaking it up, releasing it and forcefully moving it forward. It is no longer a homogeneous system at rest.

Pressure can be taken for granted because we expect to have pressure when we are at the tap, and we expect the booster pump to be working. But, when real time data is examined, changes in pressure are identified and can happen multiple times within as little as an hour.

This means the risk profile of the building’s drinking water system is always fluctuating, bacteria amplification is occurring, and water quality is going up and down. Ultimately, the risk to the building and its occupants and visitors is always changing.

Liqui-filtra can help identify, assess and act on the changing risk profile. Alarms are triggered based on pressure fluctuation.

Here is another real-life application:

There is a catastrophic watermain break outside a hospital. This is obviously unplanned and there is no notification to the facility staff of such event. Liqui-filtra will signal an alarm notifying a change in pressure so appropriate action can immediately be implemented.

Pressure variation has a huge impact on the efforts a facility team must take to maintain a safe drinking water system. It is one of the most important factors for assessing and managing water quality and bacteria risk.

How does liqui-filtra’s predictive analysis and data help a facility?

Legionella outbreaks are frequently tied to large and small disturbances in the system such as construction, maintenance or replacement of water bearing equipment, and pipe replacements but also external disturbances such as watermain breaks.

The water hammer effect these events have is extremely disruptive and the time of the event usually correlates with an explosion of Legionella and other waterborne pathogen amplification.

If we know of pressure changes and associated increased risk, we can quickly act. With the right information, provided by liqui-filtra risk can be minimized.

Liqui-filtra’s flow meter can send warnings based on flow and pressure fluctuations set by the team. Data is useless unless it initiates action. Liqui-filtra drives action based on data. If a pressure drops below a set parameter, the facility team will know, and action can start immediately. And, this can all be recorded in a water management plan.

If flow drops below a set parameter the team will be notified that usage has changed. Flow drop can indicate an increased risk and a direct correlation with stagnation. Some activity that can cause a flow drop include a flushing regime change, construction and a host of other items.

The LiquiTech team utilizes liqui-filtra to scrub information and data to determine system performance, identify key issues, and act on them quickly to reduce associated risk. We act.

And, all of the data's activity is recorded and can easily be maintained in a water management plan.

What pipe sizes does liqui-filtra work with?

Two to eight inches is typical and other pipe size accommodations can be made.

In which applications does the liqui-filtra make the most impact?

Virtually any industry that depends on having water free from harmful bacteria, sediment and other contaminants can benefit from adding this innovative self-cleaning water filter to its infrastructure. The versatility and ease of use offered by this point-of-entry water filter makes it an ideal addition to practically any kind of operation that needs water of the highest quality.

At LiquiTech we have found a direct link between sediment and bacteria. There are two scenarios that often play out.

We often work with facility managers, infection prevention professionals and engineers at facilities in the healthcare industry to lower waterborne pathogens through sediment control to protect immunocompromised patients.

Other industries we work with include hospitality, education, food processing and manufacturing, and a multitude of others.

What are the flow limitations?

What is the water waste?

It is 99.9% efficient. Every gallon of water that passes through has a .1% rejection rate. In other words, for every 100,000 gallons that goes through the filter it uses only 100 gallons of water. Traditional water filters such as sand and cartridge have higher water waste, sometimes as much as 10 to 20%.

How does it help/hurt other equipment and systems?

Liqui-filtra reduces and helps eliminate sediment from entering into the building through the municipal water supply. Sediment has been shown to increase wear and tear on water bearing equipment including pumps, valves and heating sources. Liqui-filtra, by reducing sediment, reduces the wear and tear on such water-bearing equipment. It extends the life of equipment, avoiding early and frequent equipment failure and replacement.

LiquiTech has found that often, if a facility is experiencing higher than normal valve and pump replacements the culprit is high sediment. When liqui-filtra is implemented, sediment is reduced, and equipment failure and the need for early and often replacement is reduced or eliminated.

What is the ROI?

While ROI can be hard to calculate, liqui-filtra will deliver on-going savings for the facility. Liqui-filtra will reduce sediment which will extend the life of other water-bearing equipment such as valves and pumps. Reducing the overall sediment load will also assist in reducing bacteria load and increase overall water quality which will decrease risk of Legionella outbreaks along with other waterborne pathogens such as pseudomonas.

Liqui-filtra is a key component of a multi-barrier approach to reducing the risk of Legionella, other waterborne pathogens and HAIs. Reducing sediment in your system will increase the efficiency and efficacy of copper silver ionization, ultra-violet disinfection and any other supplemental disinfection. Essentially, these systems will not have to work as hard because the water going through them is free of sediment.

Will it save me time?

Yes. Little to no maintenance is required. A facility team does not have to change filters, empty sand or change cartridges. Alerts and alarms indicating change in flow and pressure will also save the facility time and money by arming the team with early data that can initiate immediate action to reduce the risk of decreased water quality.

Interested in speaking with one of our water safety specialists? Click the button below to get started!